Mistress Cai pees on slave for smelling her underwear

Mistress enjoys pee fetish on her own

This mistress loves to pee. Anything she does for fun has to involve pee. And that is what she did today. She did not have a slave or a loser to punish or torture. She was just enjoying her pee fetish. She taped herself pissing and she would try something different each time she viewed the footage she had made. She had a lot of fn and did not notice how time flew.

Goddess Allie wanted to punish her slave and she did it as cruelly as she was able to. He had not eaten breakfast so she took his cereal and she peed into it. She made him eat it with her pee and the worst part was that he had seen her pee into it and he had to eat it knowing what she had done to it. She did not need to beat him up. That was enough punishment.

Mistress Gaia shows girl what she can do when angered

Mistress Gaia is the kind of person who is easily angered. This girl angered her today and she learned her lesson the hard way. She did not bother making a lot of noise about it. She just turned her into a human toilet and a pee slave. She made her drink her pee and do other demeaning things for her before she got up and left her nursing her wounds.

Mistresses get pussies licked before peeing on loser

Lady Serena and her friend wanted to use the bathroom. They had drunk a lot but when they got to the house, their slave was in the toilet. He had a stomach upset so he was in there for a long time. The pressed mistresses tried their best to hold on to the pee but they lost the battle and had to pee on themselves. They were furious at the slave and waited to punish him.

This mistress was shocked when these guys approached her and told her they wanted her pee. She was taken aback but she agreed. She told them she would pee in a bottle and give them but they told her they preferred to drink it directly. She thought that it was a sneaky way to fuck her but they assured her it was not. So she undressed and so did they and she had a great time peeing into their mouths.

Mistress gets loser to drink urine

When this mistress noticed that this loser was not doing what she had asked him to do, she showed him why it was in his own best interests never to fail to do what she wanted him to do. She took a piss in a jug and she fed it to him. He had to drink it all and she waited to have more pee and she gave it to him still. 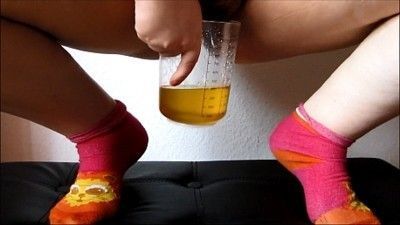 Mistresses use pee to control guy

To make sure things worked out in their favor, these mistresses chose to facesit on this loser. He was made to drink their urine and to do the humiliating things that these mistresses wanted him to do. He could not refuse because he was afraid of what they would do to him in the event that he refused what they wanted him to do. He was degraded but he took it like a man.

Mistress Giorgia Divina was so angry at this guy that she sought to do something cruel to him. She wanted to do something that he would not forget in a hurry. So she turned him into a human toilet. She peed on him after she had stripped him naked. And to make it worse, she also made him chew her toilet paper after she had wiped her pussy with it. She crushed his balls on her way out.