Mistress Kink wanted to try something crazy and something unusual. So she went to work and after a little bit of research, she settled on pee fetish as her fetish of choice. What remained was to find a loser and have fun at his expense. She went out and being a hot and sexy mistress, it was not hard for her to get a loser to dominate. She enjoyed peeing on him and doing naughty things to him.

Mistress Barbie wanted to enjoy her pee fetish, which she had not had the time to enjoy in a long time. The mistress took a video camera and she recorded herself as she had a great time peeing. Mistress Barbie was peeing on a loser and it was a lot of fun as she felt the pee go into his mouth and how he struggled to drink all of that warm piss.

Mistress Elisa was drunk. She was coming from the club and when she got near her house, she felt like peeing. She did not bother to hold on until she got to the house. She just peed where she was and did not care that it was a public place. Whoever had a problem with her peeing outdoors would have to look for her and tell her to her face.

Mistress Nica did not like her slave's work ethic. She wanted him to change and she knew the best way to make him change was to make sure he learned his lesson the hard way. She did not want him to forget it so she used her pee. He was made to drink her urine before she gave him work to do and this time he did it as he was supposed to.

Lady Stefanie wanted this guy to think that she had wine and that they were going to drink it together and unwind. So she took her pee and she mixed it with some wine and she pretended it was an exotic brand that he had never tasted. She knew he was interested in her and she flirted with him to remove his mind from the drink so that he would drink and finish it.

Mistress Jardena did not like her neighbor. He was nosy and she did not like such people. What made it worse was that he was interested in her and was always trying to seduce her. His very sight nauseated her and she did not want to see or hear from him. When he became too much, she had to deal with him so she invited him to her house and instead of what he expected would happen, he ended up being humiliated by being peed on.

Mistress Emili loves pee fetish and she wanted her girlfriend to also love it and enjoy it. That is why today she chose to teach her how to do it and how to enjoy it. They did it as if it was foreplay. She played with her girlfriend's pussy and she got her to pee as she did it. They then switched and did it again before they now ate each other out.

Mistress Anni puts pee in a bottle for loser to drink

Mistress Anni loves to humiliate guys in a crazy way and today she resorted to doing it through pee fetish. The mistress peed and packaged the pee in a bottle with even her photo on it. Then she gave her slave to drink it from the bottle. And she told him to do it as if he was drinking juice or lemonade. She sat with a whip on hand to watch how he did it. 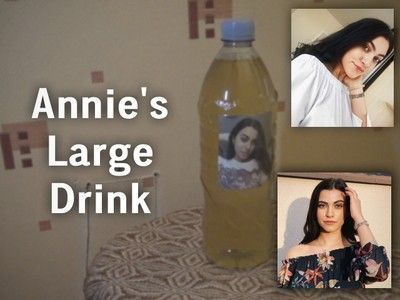 These mistresses were glad that this rude customer was the last one in the restaurant. He had insulted them and done many things they did not like. The pissed mistresses waited until every other customer had left and they turned on him and made him to drink their pee and take it with his meal. He was degraded to send a message that he had to change and not insult others or look down on them.

Mistresses use pee to get back at guys

Mistress Amirah and her friend Nikki wanted to get back at these guys who had made them make fools of themselves. They were so embarrassed themselves and it was now time to redeem themselves and they did it. The mistresses forced the losers to drink their urine as well as to lick their assholes and to smell their stinky farts. It was a lot of fun for the mistresses and absolute torture for the guys.